Marie-Paule Macdonald’s electrifying study of Jimi Hendrix charts the experiential and musical trajectory through his tragically short life. It also seeks to pin down which elements contributed to his innovative power as the pre-eminent pioneer of electric guitar playing. 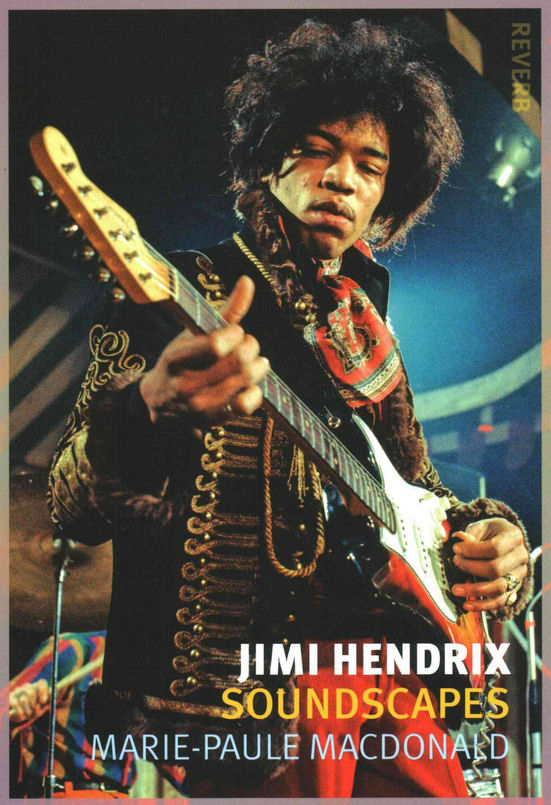 In this review, we follow the direction of Macdonald’s six chapters.

The book, in considering ‘the environments, territories and landscapes Hendrix encountered’ (p.10) sets out by establishing how Hendrix spent his formative years amidst an acoustic environment characterised by ‘a dampened, rained-on mountainous landscape, often with a horizon of heavy cloud, punctuated by a linear, continuous sound of running water.’ (p.8).

A city-dweller, he became engrossed in late night urban roaming. He ‘lived with sound flowing through his mind, an inventive guitarist and manipulator of spatialized sound equipment’ (p.11). He loved playing tight little spaces as well as open air venues, for the responsiveness of an audience ‘milling around in the ambience of the sound’ (p.10).

The succession of bands that Hendrix played in prior to the formation of The Jimi Hendrix Experience is charted: he joined Little Richard’s backing band aged 14; he loved playing country, and, in his own words,

I liked Buddy Holly, Eddie Cochran, Muddy Waters, Elmore James, B. B. King. The first guitarist I was aware of was Muddy Waters. I heard one of his old records when I was a little boy and it scared me to death because I heard all these sounds.

Hendrix started to use LSD in 1966 and there was speculation about its impact on his playing. David Crosby said ‘the strings melted when he tried to play while tripping,’ reflecting the ‘synaesthetic altering of the user’s perception of reality’ (p.52). Hendrix was however naturally attuned to the wildness and intensity potentially present in sound. ‘An engineer…  Angel Balestier, became aware of Hendrix’s sensitivity to reflected vibrations. He described the process of capturing a particular quality of sound reverberating in the recording studio’ (p.62) – that of sound bouncing off the glass between the studio and the control room.

Hendrix came to Nashville in 1962 and used it as a base to step off from on tour, both locally and internationally. At the same period the work of civil rights activists put the city in the news. Hendrix and Billy Cox, who had been a fellow member of the elite 101st Airborne Division (Hendrix had enlisted in 1961 and was assigned to the Airforce), contributed their own sit-in in a diner that was displaying a ‘white only’ sign. They were booked by police and bailed out by their employer. The Nashville environment (and audience) were tough and Hendrix credited the city with being ‘”where I learned to play, really…”’ (p.73).

The move to New York brought Hendrix into contact with a new crowd. In late 1963 / early 1964 he met Lithofayne Pridgon (aka Apollo Faye), ‘a discerning meta-groupie’ (p.83) who became his girlfriend and helped him break into the Harlem scene. Marvin Isley recalls:

Times were hard both for Hendrix personally, whose friends and band members said he never had any money for food, and for African Americans generally. In 1964 Harlem and Bedford Stuyvesant were convulsed by violent demonstrations and Harlem Race Riots led to other inner city riots across Philadelphia, Rochester, Chicago and Jersey City. The following year would be riven by the Watts Rebellion and then the Detroit 12th Street riots came in 1967.

Macdonald collates the influences together to weave the sounds of the context that Hendrix was operating in and affecting: The Kinks guitarist Dave Davies writing about plugging each amp into the other to capture a distortion that lent the hit ‘You Really Got Me’ its distinctive raw sound. It was from London’s vintage stores that Hendrix found his military jackets. And in March 1967, the band recorded ‘Purple Haze’ at BBC Manchester, in the Dickenson Road Studios.

In the New York – London Axis: A Series of Returns, Macdonald cites Mark Boyle’s description of Hendrix’s moving improvisation on the occasion of the assassination of Martin Luther King.

He completely abandoned his normal set and the band played an absolutely hauntingly beautiful… lament for Martin Luther King. Within minutes the whole audience was weeping. The music had a kind of appalling beauty, a harrowing beauty. (p.181).

Heavy Touring, the last chapter of the book before Macdonald sums up in her conclusion, sees Hendrix commissioning an architect to work on the Electric Lady Studios at 52 West Eighth Street in New York, and ends with the fleeting glimpse of Patti Smith, at the time unknown, sitting on the stairs of the new studios speaking to him at the opening party in August 1970. ‘”Three weeks later, he was dead”’ (p.235).

Jimi Hendrix – Soundscapes is a gift of a book, crammed with insights, perspectives and anecdotal detail bound together by an analytical eye trained on the streets and landscapes where Hendrix walked, the places he listened, practiced, jammed and performed and the spaces and memories that carry the resonance of  his extraordinary talent.

* This book can be found in the Arts, Sports and the Media section: AR.8.03/MAC

Reblogged this on Floralia and commented:
A book I really enjoyed reading – and reviewing. My all-time favourite guitar hero