We’re extremely excited that author Ray Costello will be joining us to talk about his historical research into Liverpool, Black soldiers and Black sailors later this month as part of our Black History Month programme (tickets still available if you’d like to join us, free but please do book via Eventbrite so we know you’re coming: ray-costello.eventbrite.co.uk). Jo has been taking a look at his most recent book Black Tommies. 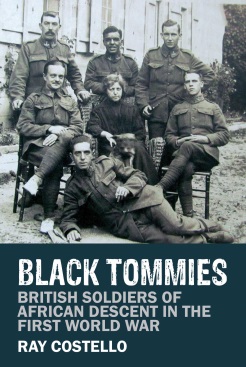 Black Tommies: British Soldiers of African Descent in the First World War is the first of its kind as a book that exclusively explores the roles of Black soldiers in WWI, a previously understudied area. Dr Ray Costello, independent historian, writer and lecturer, and Honorary Research Fellow of the University of Liverpool School of Sociology, Social Science and Criminology, lists only two other books that touch on the subject.

Black Tommies ‘builds upon the pioneering work’ (p11) in one of these books, in an attempt to reclaim a personalised, biographical account of those British born and/or domiciled soldiers of the regular army. Significantly, Costello’s Bibliography opens with an array of primary source material – documents from the Colonial Office, the Ministry of National Service Records, the War Office, various overseas archives (Pietermaritzburg Archives, Anzac Mounted Division General Staff War Diary), Commonwealth War Graves Commission, and interviews with descendants of the Black Tommies themselves.

Costello dives into this fascinating subject by contextualising it with an examination of contemporaneous British governmental attitudes towards Black troops in the colonies. On the one hand, there was a pressing need for all the manpower available; on the other, the presence of Black soldiers at the time caused considerable trepidation because they would be fighting against white troops on European territory and there was an entrenched belief in a racial hierarchy that put white Europeans ‘at the top and black Africans at the bottom’ (p18). Colonial mutiny was feared as the ultimate fall-out. Apalling references are made, for example, prior to WWI, Brigadier-General Sir James Willcock’s comment: ‘It is always judicious [….] never to give the black man an idea that you seek his assistance against other white men [….]’ (p18). Typical of the power of this prejudice is the length of time it took for a West Indian contingent to be created. Although many Caribbean men had volunteered to serve at the outbreak of WWI, the British West Indies Regiment (BWIR) was not formed until late 1915.

However, as Costello points out, the ‘far less numerous British-born or domiciled Black Tommies in the United Kingdom [….] never presented any political threat, perceived or real, on a par with the peoples under British colonial rule’ (p25). He discusses the ‘Pals’ units of WWI and the fact that ‘any groups of “local lads” recruited in a particular in a particular area of the United Kingdom were, in most cases, likely to be mixed, crossing racial lines’ (p27). The closest to a ‘Black Pals’ unit was the recruiting of British-based Black soldiers into the Royal Engineers Coloured Section.

The second chapter discusses the ‘archival invisibility’ of British born or resident Black soldiers. For example, the British Census began in 1801 but only recorded detail from 1841 and, unlike the US, race is not a salient feature. In addition, Costello had the problem that census material is only available to view after 100 years and therefore the last one viewable at the time of writing was 1911, three years before WWI.

Individual and group cases of volunteering are discussed in Black Volunteers – The Empire and Beyond. Marcus Garvey (1887-1940)’s Universal Negro Improvement Association and African Communities (Imperial) League (UNIA-ACL), founded in 1914 to unite Africa and its diaspora, gained ground after WWI, but at the outbreak of war, Garvey and his colleagues sent a memo to the Colonial Office pledging ‘our loyalty and devotion to His Majesty the King, and Empire and our sympathy with those of the people who are in any way grieved and in difficulty’ (p71). There were many inconsistencies in recruitment. Lionel Fitzherbert Turpin, father of boxers Dick (1920-90) and Randolph Turpin (1928-66), the world middleweight boxing champion, experienced the reluctance of involving Black recruits in armed combat; whereas Sergeant L. McIntosh and Flight Sergeant W. Robbie Clarke, for example, who were lighter-skinned Jamaicans, were able to enlist without problems.

Chapter 4, Black Officers, White Soldiers, opens with a biography of Second Lieutenant Walter Tull, often erroneously ‘credited as the first black officer in the British Army’ (p91), followed by a discussion of the social hierarchy based on skin shades that had been developing since the time of transatlantic slavery among the West Indian islands, North America and other areas of African diaspora. Social class, as Costello goes on to explain, also had a bearing on whether a Black applicant could obtain a commission as an officer. Next, Costello outlines the lives and careers of several Black officers, including George Edward Kingsley Bemand, Reginald Emanuel Collins and Brigadier General Horace Somerville Sewell.

In The Black Empire Arrives – Conscription, we see that after the BWIR arriving from the Empire in late 1915, the next unit came from Bermuda in March 1916, then the South African Native Labour Contingent in October 1916, followed by Black Canadians in March 1917. As Costello points out, ‘each of these countries of the British Empire would have to deal with their own issues of black recruitment and conscription’ (p113).

The title of Chapter 6 is from that of Walt Whitman’s poem, The Return of the Heroes, written prior to WWI at the end of the American Civil War, and that emphasises ‘the difficulties of reconstruction and the transition these men would have to make to civilian life’ (p133). Black soldiers, writes Costello, would also have challenges to face when they arrived home. Exploring the arena of medals and accolades, this chapter shows how ‘only white soldiers could receive the Victoria Cross (VC)’ (p135) during WWI. However, in the nineteenth century, the VC had been awarded to Black recipients. These had included William Edward Hall, AB, RN, a Nova Scotia marine and son of an African slave, and the first Black soldier to receive the VC, Samuel Hodge, serving in West Africa in 1866.

Costello turns then to the homecoming of Black British soldiers and we see new social shifts and the momentous task of reconstruction. ‘There was also a search for scapegoats for post-war hardships endured by the population’ (p139). In 1919, riots broke out in major British cities due to competition for jobs among other reasons. Costello ends this chapter by suggesting that ‘despite the fact that black people had lived and worked in Britain for centuries, a negative vision of their presence assumed a new prominence after the First World War’ (p162).

The epilogue to this necessary and important book opens up the possibility of further research on the subject as a significant contribution to military history and the need to ‘keep looking’ (p166) for Black Tommies. Costello concludes with the words from the inscription on a tomb in Westminster Abbey:

UNKNOWN AND YET WELL KNOWN, DYING AND BEHOLD WE LIVE

Find this book in the Resource Centre’s History section: HI.01/COS

[…] In a previous post we looked at the book Black Tommies, in which historian Ray Costello painstakingly researched the lives and times of Black soldiers living or domiciled in the UK. Costello’s research was a process of rescuing these soldiers from historical invisibility and anonymity. By contrast, Fosso has devoted his career to imitating important historical figures; his work is not about overturning invisibility or anonymity. Rather, he is about weaving his way in and out of the history of power relations, emerging across the decades under innumerable disguises. He takes on the visual outward appearance of these figures, but just behind the mask you can sense Fosso himself, having a great time and laughing aloud at the joyful subversion of it all. […]