In preparing for our Paul Robeson hands-on session next Wednesday (details on our website and Facebook) I keep coming across the name Wilf Charles. He was one of a small group who established the New International Society in Moss Side in 1946, an organisation that promoted anti-racism locally but also supported international causes, including many championed by Robeson. As a result of this relationship Robeson came to sing at the Society in 1949, but more about that another time…

Wilf Charles is mentioned, in passing, in literature about Len Johnson (Manchester’s black boxing hero), about the International Brigade and the Spanish Civil War, the Communist Party and the 5th Pan-African Congress in Manchester.

Who was this radical chap?

I was pleased to find we have an oral history by him in the Roots Family History Project collection. 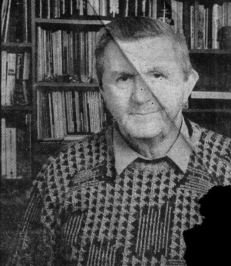 Born and bred in such a place as Moss Side gives you a very broad political understanding, if you were lucky enough to get it. So instead of just becoming a narrow trades union person I linked up with the Communist Party and my own political viewpoints on it, and then the experience of Moss Side – I’ve been very, very associated with international affairs.

Wilf Charles was British, born into a poor ‘illiterate white’ family in Moss Side around 1916. In his oral history interview he tells us how Moss Side, with its waves of immigration from Irish, African, West Indian and South Asian migrants, had been instrumental in his political development. He talks a lot about his relationship with Len Johnson and the establishment of the New International Society:

Len Johnson who is now a great friend, who was a famous black boxer who was born and bred in Gorton, Manchester, not far away, but now came to live near me in Moss Side and the two of us were very, very active in the Communist Party and we had this dream together that we’d do a great deal of good by having an international centre where we would campaign for racial equality and so on.

His interview also reveals some of the tensions he faced as a white man working towards what some saw as black causes. For example, he talks very honestly about the change in terminology from ‘coloured’ to ‘black’; what the two terms meant for him and his anxiety about causing offense:

I still feel unhappy about it I don’t know why. If I’m honest it’s my ignorance. All my life I’ve used – coloured – when I needed to use it, because he was just Len Johnson to me – and then suddenly – it was a very forceful expression among a number of people.

But as a lifelong member of the Communist party he firmly believed that class inequalities, not racial difference, underpinned the social problems so often attributed to immigration:

It’s often used as an excuse. I’ll tell you why, around 1929, 1930 Moss Side – squalid, terrifying conditions – but no black faces […] bad housing, bad education. Always given to the poor. And now it’s added to, made worse and manipulated with a racial problem put on top of it, just thrown in without any natural coming together and education and allowances for each other.

For him it was the many problems associated with poverty, compounded by the ‘despicable role of the media’ in manipulating tensions (‘every report in the Manchester Evening News – every mugger is a black fellow or whatever, which everybody knows is bloody nonsense. In the 30s there were as muggings as you ever did see, again with not a black face’) that led to the ‘viciousness of racialism’.

You can see how this terrible crime of racialism is the main thing all over the world, it’s not just in this country, they split and divide the people, the working classes, for imperialism and war.

It’s very clear that Wilf Charles was something of a lynchpin; active in everything from Irish freedom to the Pensioners’ Trade Union. But there is no sense from his interview that he considered himself to be a figure of power, or ever sought prestige in any form. His ideological calling was tightly bound up with the lived experience of Moss Side and his identity within that community.

Reading his interview has given me a lot to think about, and has been a timely reminder of the importance of oral history as a way of preserving voices, experiences and attitudes from the past that otherwise slip through the pages of history.

You can find more information about Wilf Charles’ life, including a taped interview and biographical file, at the Working Class Movement Library.

3 replies on “Ours is a Very Active Life”

My name is Neil gilroy and I was friend of Wilf for over 40 years. He was also an outstanding trade union official in the then Construction Engineering Union and highly respected by most other Trade Union Officials in Manchester.

Thanks for your comment, Neil – do drop in and take a look at the Roots Family History Project if you get a chance.

[…] and politically. Her father had been very active in the Manchester Communist Party alongside Wilf Charles and Len Johnson, who had a friendship with Robeson. Linda remembers her father taking her to see […]