As soon as I opened the ‘Adventure Play’ folder

of the Elouise Edwards photograph collection I knew I wanted to write about these pictures. Although the folder also included photos of children horse riding, ice skating, river-wading and bouncy castle-jumping, the photos of the adventure playgrounds are what had me hooked. I have so many questions!  Who built them? Where were they? Were they safe? Did that even matter?

The photos show enormous wooden and metal structures, usually near a large housing block or in large empty space, with children leaping, hanging and balancing on the various platforms, slides, planks and ropes – smiling for the camera as they go. It struck me just how different playtime was for children in the 70s than it is today – not a screen in sight (just dizzying heights and a couple of splinters instead).

END_OF_DOCUMENT_TOKEN_TO_BE_REPLACED

Our archivist Jo Robson reflects on our Hulme Study collection

The Hulme Feasibility Study was undertaken between 1987 and 1990 to formulate proposals with a view to improving the environmental, commercial, employment and social conditions in Hulme and the Moss Side District Centre areas of Manchester.  Professor Valerie Karn of the University of Salford was appointed as an independent chair to the Supervisory group.  The Hulme Study Archive held at the Ahmed Iqbal Ullah Race Relations Resource Centre is made up of the papers collected by Valerie Karn during her time as Chair of the group.

The Study was innovative in its management which was tri-partite being jointly supervised by The Department of the Environment, Manchester City Council and tenants representatives.  The aim of the Study was to provide an independent account of the social, physical and economic conditions on the estate.  In addition it aimed to identify opportunities for improvements and recommend short and long term strategies which the three parties could use to develop an action plan for the area.

END_OF_DOCUMENT_TOKEN_TO_BE_REPLACED

We all have our dreams. But what if they turn into nightmares?

Take the Hugh Wilson and Lewis Womersley firm of chartered architects and town planners. In the 1960s they dreamt of solving the problems of twentieth-century living by providing quality design and housing to a level reached in the eighteenth century for Bloomsbury and Bath. By using similar shapes and proportions, large scale building groups and open spaces, plus skilful landscaping and extensive tree planting, they hoped to make their dream reality. Where? Don’t laugh when I tell you. Hulme in Manchester.

Yes, Hulme was to be the setting for pioneering brave new town planning. The slums were to be cleared and in their place would arise beauty. There was just one problem. The designers’ dream became the Hulme residents’ nightmare scenario. Leafing through the Centre’s Hulme Study Collection, I came across Wilson and Womersley’s hopeful musings on the cover of Manchester City Council’s Survey Report  Hulme. A Position Statement September, 1987.

END_OF_DOCUMENT_TOKEN_TO_BE_REPLACED

This week, as it’s the Manchester Histories Festival and we’re here in our new home at Central Library, we’ve been taking advantage of the handling table in the Ground Floor Archives+ exhibition area. 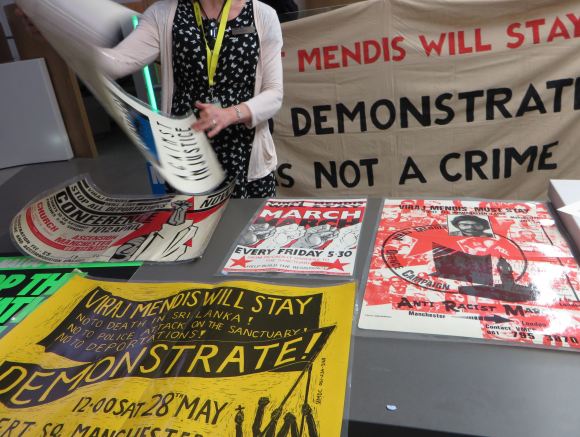 On Tuesday afternoon Ruth and I pulled together a selection of items from the Steve Cohen archive, which is a large collection of anti-deportation campaign memorabilia from the 1970s, 80s and 90s, donated by the Manchester activist and community lawyer Steve Cohen. There are more than 70 campaigns represented in the collection but we decided to focus on the case of Viraj Mendis.