As part of Black History Month 2019, we hosted an event with writer, poet, and director Elmi Ali called ‘The Afrofuturist Toolkit’. During the workshop the participants explored the theories behind Afrofuturism and created some of their own work envisioning the future of society. Ali’s overarching message was that Afrofuturism can take any form and is all around us, demanding a space in the future for Black people defined by themselves. “It looks to the past to define and make sense of the future.” According to Ali, ‘ism’ can be understood to mean “how something could be”.

To coincide with this BHM2019 event, the AIU Centre library purchased an important book by Ytasha L. Womack on the topic of Afrofuturism, which has led us to discover other Afrofuturist elements in our library!

So, what is afrofuturism? In the words of Womack, Afrofuturism is ‘an intersection of imagination, technology, the future and liberation.’ She states that Afrofuturists ‘redefine culture and notions of black-ness for today and the future.’ As far as ‘isms’ go it may be a lesser-known one, but there’s a lot to unpack – it combines historical, speculative and science-fiction with fantasy, Afrocentricity, magic-realism and non-Western beliefs.

This book provides an accessible but thorough insight into Afrofuturism, from a personal perspective as well as academic. It’s equally as enjoyable for those who have no previous knowledge of the topic as it is for scholars looking to expand on what they already know. Womack covers the origins of Afrofuturism (the term was coined in 1994) but claims to have been an Afrofuturist “before the term existed”; she states that others qualify as one too if they, like her, found themselves wondering why Black people are minimised in pop culture depictions of the future.

The various chapters discuss the ideology and foundations of Afrofuturism in relation to several areas of 21st Century culture in the US (and elsewhere). These include Cosplay, the internet, historically Black colleges and universities (HBCU), film theory, and on a deeper level she draws parallels between alien abduction narratives and the transatlantic slave trade.

The connections between Afrofuturism and the history, religion and astrology of Africa stem mostly from Ancient Egyptian beliefs. Afrofuturist artists and individuals combine this historical inspiration with modern technology and arts. Womack has such a depth of wisdom on the roots of Afrofuturism that any readers with or without an existing knowledge of African deities and goddesses will learn a lot. This book is engaging throughout; it never stays theoretical, historical or factual for too long, but instead throws popular cultures references into every chapter, such as an analytical comparison of the costumes of Azealia Banks and Tina Turner to African water deity Mami Wata.

Ultimately Womack urges society to reassess how it views the future, which is inevitably also the present and the past. Although there have been ground-breaking developments in the representation of people of colour in the future (such as the film Black Panther), Womack’s plea is as valid as ever. She asks us to consider why, in an age in which universities and museums are striving to uncover the neglected Black histories and repatriate stolen items, popular culture, media and academia still won’t envision Black people existing in the future. Or in her own words:

‘When, even in the imaginary future – a space where the mind can stretch beyond the Milky Way to envision routine space travel, cuddly space animals, talking apes, and time machines – people can’t fathom a person of non-Euro descent a hundred years in to the future, a cosmic foot has to be put down.’

Back to Black: Art, Cinema and the Racial Imaginary (2005) by Richard J. Powell, David A. Bailey and Petrine Archer Straw

This is a fantastic publication on the Black Arts Movement, created as part of Africa 2005, ‘a year-long celebration of contemporary and past cultures from across the continent and the Diaspora which embraces the diversity of arts, heritage and audience’. The book features a collection of essays on topics including Black identity and image, Black cinematic narratives including Blaxploitation, documentary photography, influential art and music, and Afrofuturism.

The title of the chapter of interest here is ‘Afrofuturist Cineculture in an Age of Cultural Revolution’, written by Kodwo Eshun. One thing that caught my eye was the mention of Sun Ra, ‘America’s most important postwar-avant garde composer.’ Ytasha Womack had mentioned Sun Ra several times in her book too, describing him as Afrofuturism’s ‘founding pillar’ who wanted to use music to heal. Kodwo Oshun writes about ‘myth science’, highlighting the common combination of ‘revisionist visions of ancient Egypt with a sustained interest in extraterritoriality and electronic technology’. 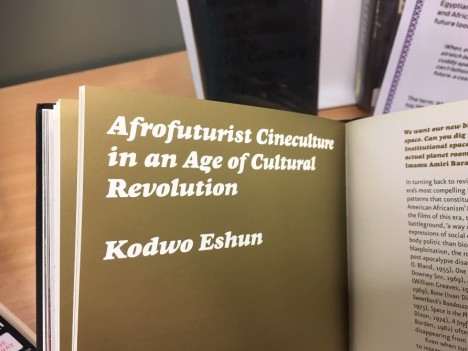 The main body of this article discusses Sun Ra’s role in the 1974 film Space is the Place. It describes a scene in which Ra appears to a group of Black youths in Oakland and explains how neither he nor they are real:

“I’m not real. I’m just like you. You don’t exist, in this society. If you did, your people wouldn’t be seeking equal rights. You’re not real. If you were, you’d have some status among the nations of the world. So we’re both myths.”

Whether or not you agree with Sun Ra’s opinion here, this quote from the film really summarises what Elmi Ali, Ytasha Womack and Kodwo Eshun have all said. Afrofuturism is about imagining and creating a space for Black people in the future of a society that currently excludes them, by any means possible.

The more I think about the concept of Afrofuturism, the more books and collections jump out as relevant. Please let us know your thoughts on this topic or any links you can see in our library!