While the majority of the boxes in our archive contain uplifting material about the lives and experiences of black and minority ethnic people and their histories, there are inevitably some boxes that are far from uplifting. Though difficult to read and controversial in content, this smaller and lesser-known part of the collection reminds us that racism has always existed and should not be excluded from our collective memory.

This is one of the reasons I decided to take a look in our box labelled ‘Scientific Racism’, a certain type of racism that claims to be backed up by scientific research. The other reason is the unwelcome fact that scientific racism never truly went away, and is once again rearing its head in an increasingly mainstream corner of America, according to several recent news articles. A small group of political scientists is attempting to revive the types of findings that are recorded in our archive, which are then being used to a certain degree by members of the ‘alt-right’ to justify their nationalist and racially discriminatory politics. Searching through the box I noticed that the material in our archive and the claims made in the past few years are alarmingly similar, but so are the methods of scrutiny, backlash and protest against them.  I hope this blog post will remind us that racism never disappeared and is still a threat to racial equality today.

Most of the material on Scientific Racism found its way into our archive when we acquired the Commission for Racial Equality’s library and is mostly made up of newspaper clippings, pamphlets, reports and papers.  There is even a pamphlet aimed at teachers who are struggling to understand the supposed connection between intelligence and race (below).

The focal point of the box is a famously controversial article published in 1969 by Arthur Jensen, titled ‘How Much Can We Boost IQ and Scholastic Achievement?’ Known as the ‘Jensen Article’, it concluded that 80% of a person’s IQ was influenced by genetic factors (DNA) and the remainder was due to environmental influences (e.g. income, education, housing), which allowed Jensen and his supporters to claim that ‘black Americans, on the average, are genetically inferior to whites in IQ’.

In connection to this, Jensen also claimed that education programs supporting low-income, predominantly black children in schools such as ‘Head Start’ would never be successful. This entirely disproven opinion is disturbingly similar to the views of some current policy-makers under Trump, who also seem to connect race and intelligence, and allow this to affect their political views on topics such as welfare and education.

In my opinion, the newspapers are some of the most striking content in the collection, some of which support and some strongly reject Jensen’s findings. They range from immediate responses in 1969 to follow-up articles years later and are a fascinating read. This article from the New York Times Magazine was especially interesting due to its position as both sympathetic  to Jensen’s research, but in opposition to it being acted upon:

‘Isn’t it terrible and self-defeating to make people think they can never break the bonds of their genes? Why raise the spectre of invisible disadvantage to an already disadvantaged group? Right now the Negro is coming into his own. Why allow others to use a weapon against him at such a critical time in history when he needs everything to give him a sense of uplift?’
-Lee Edson, New York Times Magazine, 31st August 1969

On the one hand, terms such as ‘invisible disadvantage’ and ‘the bonds of their genes’ suggest that the writer agrees with Jensen’s belief about genes affecting intelligence, but on the other he clearly argues that Jensen’s work is ‘terrible and self-defeating’ to those who are ‘already disadvantaged’. Is it possible for someone to see both sides on a subject like this? Journalists nowadays certainly seem far more inclined to fall hard on one side or the other on questions of race. 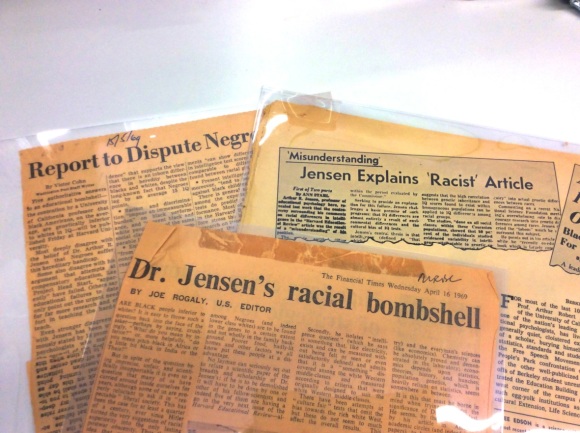 A third (and final, for this blog post) aspect of the archived material that caught my attention, was the reaction of university students to this racist strand of ‘scientific research’. As a recently graduated student myself, I strongly believe in the power of students as voices of change, so when I read that students at Berkeley protested against Arthur Jensen and his article, I felt a connection! It states in one of the archived articles that students chanted “Fight Racism, Fire Jensen” around campus, sent him letters and postcards denouncing him as racist, and invaded his classroom causing him to employ security or teach in secret locations. Again what struck me was the similarity between these student-led actions in 1969 and some student protests that took place last year against a contemporary political scientist who has written books very much in line with Jensen’s beliefs. Some students at Harvard demanded he be banned from speaking, and others at Middlebury attended his lectures but held up signs and turned their backs on him.

It’s not until you open up these boxes that you realise the history documented inside is often still relevant to events taking place now. Although the similarities between Arthur Jensen’s article in 1969 and scholarly, scientific and political discussions taking place in the current decade are disturbing, they act as an important reminder not to dismiss scientific racism as a thing of the past. Two of the most striking sentences I came across could easily have been written about race relations today, one stating that the debate reflects “a measure of the deep tensions that run through the heart of American life today” (New York Times Magazine, 1969), the other claiming “At the drop of a hat, we will classify human communities into groups, and start ranking them in some order – superior, inferior, in-groups, out-groups, and so on” (The Observer, 1972).

One reply on “In the Archive: Scientific Racism is Still Racism”