Between the World and Me, by Ta-Nehisi Coates (The Text Publishing Company, Australia: 2015)

This is a timeless book that will not age, like the works of James Baldwin, Maya Angelou or Toni Morrison. ‘This is required reading,’ Morrison herself has said, in a quote that foots the cover of Ta-Nehisi Coates’ bestseller, Between the World and Me.

Between the World and Me is written in the form of a letter addressed to Coates’ teenage son, a veritable prayer that is drenched in love and born out of struggle. It should make America sit up and take notice.

Ever since his own boyhood, Ta-Nehisi Coates tells his son that he:

‘…knew that my portion of the American galaxy, where bodies were enslaved by a tenacious/gravity, was black and that the other, liberated portion was not [….] I felt, but did not yet understand, the relation between that other world and me. And I felt in this a cosmic injustice, a profound cruelty, which infused an abiding, irrepressible desire to unshackle my body and achieve the velocity of escape.’ (pp20/21).

From his school years in Baltimore where he managed to survive ‘the insidious gravity of the streets’ (p35), he goes on to discover ‘The Mecca’ that is Howard University, with its beautiful, diverse campus where he spends hours people watching and making friends, and equal hours reading voraciously in the library the wealth of Black writing and history that he finds there. Mecca is at the ‘crossroads of the black diaspora’ having had a ‘near-monopoly on black talent’ (p40) in the Jim Crow era.

The sense of a paradise on earth at Howard is shattered by the unwarranted killing of Prince Jones, one of Coates’ fellow-students, by an undercover police officer – or by state-sanctioned racist violence, depending how you look at it.The form Coates’ own book takes is a result of his deep fear for his son’s safety, for his vulnerability as a young black man growing up in the US today. ‘I am writing you because this was the year you saw Eric Garner choked to death for selling cigarettes; because you know now that Renisha McBride was shot for seeking help, that John Crawford was shot down for browsing in a department store’ (p9). The list goes on. It’s because of these such incidents that Coates realises that the ‘velocity of escape’ is not possible.

It’s a profound, emotionally charged book that hits home the impossible, paradoxical double-bind that can be a daily lived experience in America (and elsewhere), a situation where young black people have been brought up being told that they have to be ‘twice as good’ – twice as responsible, twice as smart, twice as careful, twice as aware, twice as conscious. And even if they are – as Prince Jones was – they can still be gunned down in a fraction of a second: as his heartbroken mother told Coates, ‘”…one racist act. It’s all it takes”’ (p145).

Coates tries to teach his son by telling him about his own experiences and awakenings growing up and learning about the world. ‘You have to make your peace with the chaos,’ he says, ‘but you cannot lie. You cannot forget how much they took from us and how they transfigured our very bodies into sugar, tobacco, cotton, and gold’ (p71). 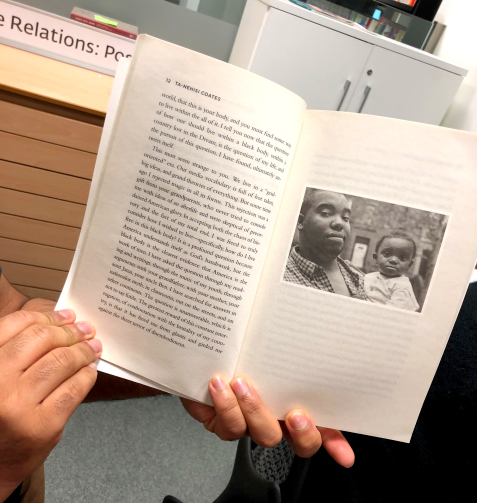 He tells his son about visiting the sites of the Civil War, showing him how the crime is confessed: ‘”Our position is thoroughly identified with the institution of slavery,” declared Mississippi as it left the Union, “the greatest material interest of the world”’ (p101). He tells him about the refreshing anonymity and style of the European city of Paris, where ‘we are not their particular “problem”, nor their national guilt’ (p128), at the same time reminding him of the disrespectful attitudes towards Algerians or Roma there. Coates wants his son to be aware of the terrible beauty of life, not to be twice as good, he says, but to be conscious.

The visit to talk with Prince Jones’s mother, Dr Jones, is the last episode in Coates’ book that he relates to his son. Dr Jones strived to move out of grinding poverty, becoming a highly qualified pillar of society and community, who brought her children up in the ‘lap of luxury – annual ski trips, jaunts off to Europe’. Her daughter’s present for passing her test at 16 was a Mazda 626. Dr Jones tells him how she ‘”spent years developing a career, acquiring assets, engaging responsibilities”’ (p145).

Coates can only conclude that the ‘Dreamers’ (as he describes those who perpetuate the banditry of old white America) somehow need to arrive at an understanding for themselves, that it’s not something Coates or his son or anyone else will be able to teach them. The same compulsion that led to slavery has led to the plundering and corruption of nature, of planet Earth, and to the widespread incarceration and killing of black people in America.

The outlook, he seems to be saying, is bleak. Predictions for the future are not positive. But Coates offers his son a vision out, by encouraging him to seek out the beautiful elements of life, to raise his awareness, to struggle for wisdom and for the ‘warmth of The Mecca’ (p151). The abiding hope at the end of the book is for radical change, for realisation and awakening not just in his own son but in society at large.

Find this book in our library

One reply on “The Mecca, the Dreamers and the Double-bind”