In this book, Reggie Yates provides those who have watched his BBC documentaries (‘Extreme Russia’, ‘Extreme South Africa’, among many others) with a behind-the-scenes look at their making, plus an understanding of his own career development.

If you haven’t seen his documentaries then this book gives a flavour of his presenting style on-screen, as he dissects the films in detail; but with the additional insights of a written narrative. The major landmarks, and all the highways and byways in between. His documentaries explore, broadly speaking, youth-centred issues – such as being young and gay in Russia, aspiring to supermodel status in Siberia, body modification in the UK.

Yates’ first official job as a working actor age nine was ‘a tiny role on Channel 4’s longest-running sitcom at the time’, Desmond’s. A black family with a successful barbershop in Peckham, South East London. Some years later he comes across Louis Theroux documentaries and immediately knows that ‘this was a lane I would kill to operate in.’ 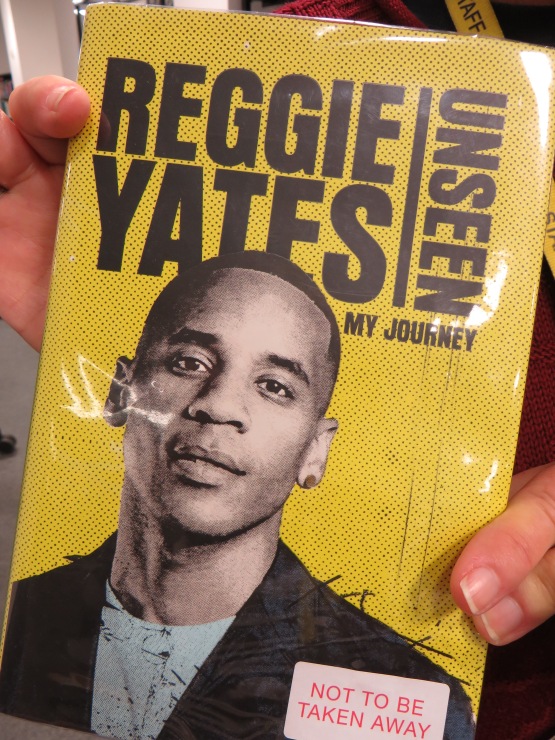 Yates talks about how as a minority in British TV, ‘you’re constantly made to feel odd in your outlook, because culturally you’re an abnormality, and by the numbers you’re an anomaly.’ But by his early 20s he was on ‘good money’ in full time TV work. He fronted an ‘exceptionally well-received documentary on autism, followed by “Tourettes: Let Me Entertain You”’. In 2013 BBC 3 commissioned the series ‘Reggie Yates: Extreme South Africa’ and he was becoming highly successful in his field.

‘Reggie Yates: Unseen – My Journey’ is an engaging and entertaining book, as Yates’ written style has all the wit and sharpness of his on-screen presence. In Chapter 1, Hope For Hire, he recounts the way he homed in on the ‘multi-millionaire holy man’, the ‘wealthy and congregation-funded Prophet PFP Motsoeneng Mboro’, who at the time of Yates’ writing was ‘making international news for selling photos he took on his smartphone while in heaven, for 5,000 rand.’

Getting to the bottom of this preacher’s massive popularity, Yates sees that he’s not just a religious leader but a celebrity. He is also immensely rich and by the end of Yates’ time spent in his company he still disapproves of Mboro’s living off his flock. However, he can see why someone like the young woman, Tooli, whom he speaks to, would say that ‘she wouldn’t want to be led by a pastor who doesn’t seem to be progressing in life’.

Far Right or Wrong? (Chapter 2) takes Yates to Russia. Shocked by the bitter cold, the fact that he’s ‘the only person of colour to be seen anywhere’ in Moscow, and the supremacist attitudes of many of the young people he encounters, Yates attends a fashion show staged by SET, an organisation run by ‘young men and women rallying around the president in an effort to fight back against the West.’

On a visit to SET’s offices, he is ‘entirely thrown by the most ridiculous thing’ he thinks he’s ever seen – wallpaper covered with photos, each featuring Vladimir Putin ‘canoodling with an animal’ – dophins, horses, chicks, dogs. He also meets 19 year old Macha, an internet star who works for Putin’s party and has a worryingly declamatory style with online statements like ‘…victory will be ours, if we lose, we will destroy the whole world’ not dissimilar to what she says offline. Yates leaves one of Macha’s photo shoots with a ‘mild headache and a slight shift in [….] expectations’.

What’s great about Yates in a documentary is also here in the book – he’s constantly besieged by completely bizarre people and situations, and his responses are both thought-provoking and hilarious in equal measure. Much of what he observes is more than highly dubious, such as the non-white civilians being stopped for ID checks in Russia every morning on their way to work – a daily normality it seems – and piled off into a ‘meat wagon’, in other words becoming criminals simply for walking down the street.

In other chapters he documents teenage girls from Siberia being marketed for international modelling contracts; young British men getting dangerously, almost nihilistically interested in bodybuilding; Roosh V, the creator of ‘how to books’ on picking up women that ‘read like a guide to getting arrested for sexual assault.’

Insights that you wouldn’t pick up from just watching the documentaries are thoroughly interspersed. Caught up in a far right mob on the march in Moscow, his translator falls worryingly quiet. ‘She didn’t want me to know what she was hearing so I could continue to do my job on the day’ – Yates only finds out the depths of racism in the heckling of the crowd when he reads the subtitles in the final cut as it is broadcast on TV.

Yates in his last chapter, South Side, which concerns the disproportionate killing of young black people, particularly but not exclusively male, on the streets of Chicago, is perhaps at his most emotionally connected – and, rightfully, upset. He attends the funerals of young people caught up in the crossfire of the ‘double whammy of police brutality and black-on-black crime’ and it makes heartbreaking reading. Community activists are working so hard to alter the course of the social and political situation, to protect their families and young people.

Yates recounts the much needed team dinner he had with his colleagues on the shoot following such a funeral and we see the documentary maker ‘decompressing’ afterwards, not possible to include in the final film, but part of Yates’ own lived experience. By the end of the book, any doubts that Yates is not in the habit of putting his heart and soul into his work are banished.

Reggie Yates Unseen is available for loan in the Arts Media and Sport section of our library, as well as many other libraries in Manchester. See the catalogue listing here.

Related reading in our library:

Elsewhere on the blog:

One for the Crime
Radicals and Renegades

One reply on “Behind the footage: a survey of a career in TV”

Reblogged this on Floralia.