Kotha & Kantha: Bangladeshi Women’s Memoir Project (BWMP) funded by the National Lottery through Arts Council England – Grants for the Arts Award, and the Education Trust, and supported by the Longsight-based Manchester Bangladeshi Women’s Organisation Ananna, and Archives+, began in April this year. Right now, we are tying up the evaluation and the final details of the project as the summer progresses, giving us time to reflect on the impact it has had already.

“I have learned to sew and write stories and poems and enjoyed photography.”

We decided to work with the Bangladeshi community because 2016 marks the 30th anniversary of the death of Ahmed Iqbal Ullah, the Bangladeshi boy murdered in the playground of a local Manchester school, and in whose memory our Trust and Centre are named. We are also carrying out an HLF project ‘The Legacy of Ahmed’, collecting oral histories. The Kotha & Kantha project has complemented and enhanced the HLF project and the artistic outputs of the women’s work will be showcased at a larger celebration event for this project, and be included in an exhibition in the Community Exhibition space in Central Library.

BWMP was devised to strengthen the work we do with artists, improve the skills of the artists involved and improve the writing and embroidery skills of the participants. We also hope it will increase knowledge about race, racism, migration, history and culture for the wider community.

Two sets of six workshops run by two arts professionals, the playwright and teacher Dipali Das and Senior Lecturer in Textiles in Practice at Manchester Metropolitan University, Lynn Setterington, took place over a period of four months. During this time the glass meeting room on the ground floor of Central Library has been filled with laughter, friendliness, reminiscences and creativity. Eight women of Bangladeshi origin, referred to The Centre by Ananna, formed a group together and at the outset did not necessarily know each other. But by the time the project had finished firm friendships had been established.

“Having the pleasure of meeting new people, writing I enjoyed especially about past memories. Also the photography and sharing discussion groups.”

The women met with Dipali, invited by The Centre to be the Writer in Residence for BWMP, to experiment with a different literary form each week. In the first session, Dipali threw out the prompt ‘I come from…’, hearing that most of the women had only been in the UK for around two years, and one for three months (although some had been living in Europe prior to coming here). There was a free-association round where the women were asked to share words that summed up what felt like ‘home’ to them, whether that meant home as in Manchester or home as in Bangladesh. At the end of the two hour session, all of the women had written an ‘I come from…’ poem, making it an encouragingly productive experience from the outset for all concerned.

“My most memorable thing in the whole project is writing poetry and sharing my life story.”

Subsequent weeks saw the production of sheets of drawings and memoir; recalling childhood games and traditional songs and writing them down; recipes from home (the women were very generous and brought in examples of home-cooked sweets or pitha to share among themselves and The Centre staff) and traditional folk tales.

“I think I like everything specially, very specially pitha recipe and story.”

In the penultimate week the women wrote down memories of the War of Independence and the results were heart-breaking to read. As the weeks went by and the embroidery workshops with Lynn began, the group became more and more devoted to the project – rather than the other way round: quite often, it can be difficult to motivate a group to commit to long projects such as this but in this case, the women came back week after week and genuinely enjoyed the experience, which was very rewarding.

“I liked everything in the workshop, specially writing childhood story and childhood memory. It’s remembered my childhood.”

We did also try to encourage a group of Bangladeshi women from Oldham to join in with the Manchester-based project but unfortunately they were put off by the length of travelling time that that would require. However, Dipali was able to deliver a one-day version of BWMP in Oldham and five women produced their own versions of the ‘I come from…’ poems. These are also included in the bound volume under the section headed ‘Oldham Poems’.

As the project drew on we came closer to the date of the celebration event, to be held on the 20th July in the Performance Space at Central Library, to which the women were able to invite family and friends to join The Centre’s own staff, board members and associates, and they indicated that they would be happy to read out examples of their own work at the event. We were a little surprised, but delighted, with this enthusiasm.

“I like everything, properly. Sure, photography, embroidery, new people. I learned how to write a poem.”

Prior to the celebration event, we put together a bound volume of all the women’s writing and drawings, which also includes photography by the project’s professional photographer, Jason Lock, and which is available for browsing through at The Centre. This involved a large amount of translation, which Dipali’s mother, Asha Rani Das, kindly undertook, together with scanning and organising into sections. There began to be rehearsal spots added onto workshop sessions, so that a running order for the readings at the event could be organised.

The embroidery workshops were a visual delight, with the glass meeting room’s table strewn with jewel-bright threads and flickering needles, and the women each produced a square sample of traditional Kantha embroidery, becoming more deeply coloured and intensively worked with each successive week. At the celebration event, which was attended by over 80 guests, the Kanthas were displayed on exhibition screens. Another major part of the project was the photography commissioned from Jason Lock. With great sensitivity and tact, he familiarised the women with the idea of taking portrait photographs of them in their finery, to be printed out onto sheer fabric panels which were eventually displayed at the event on fine wooden constructions so that they were lit from behind by the natural light streaming in through the performance space windows. In total 8 portraits were used in this way, but in addition, as mentioned above in relation to the bound volume of writings, Jason took many other photographs of the women at work and a selection of these were reproduced and displayed on a second exhibition screen.

“The most memorable thing from my involvement was the photography.”

One of the fantastic outcomes from the project is that at least one of the women has written poetry since Dipali’s workshops and seven out of seven women said that they would attend a similar project again.

In the autumn, Dipali will be producing a second bound volume with us to be kept on the Centre’s shelves, comprising of her own writings based on the AIUC’s archives and collections. This will include the stage play We Fight to Save a Flower, an excerpt of which was read by Dipali and Centre staff-member Sam Kalubowila as part of the celebration event. 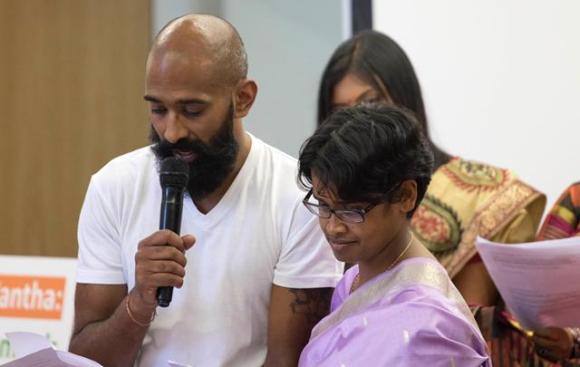 * Find the volume ‘Kotha & Kantha: Bangladeshi Women’s Memoir Project’ bound in red and blue on the shelves of the Ahmed Iqbal Ullah Race Relations Resource Centre collection, Lower Ground Floor in Central Library.
* Follow the display of Kotha & Kantha: Bangladeshi Women’s Memoir Project as it tours local libraries and other venues over the next six months.