Last time we discovered Barrington Young had become the first Black railway inspector in Manchester. We also found that he’d begun a United Nations in his own home by marrying an Austrian in the 1950s. This time, we’ll see Barrington fully engaged in transmitting knowledge of his own, as well as wider Black history, to youngsters of all ethnicities.

Barrington retired in 1994. Counting his years on the railways as the best time of his life, he joined the Railway Club to continue that good experience into the future. But by 1998 we find him in a different role. It was the 50th anniversary of the arrival from the Caribbean of the good ship Empire Windrush in 1948 and Barrington was enrolling on an exciting innovative new course – Mapping Our Lives: The Windrush Project.

Held at the Hulme Adult Education Centre Mapping Our Lives enabled participants to trace, in words and pictures, the moves they had made during their lifetimes. Barrington and five other elders took part, compiling a presentational album, mounting exhibitions in local museums and the Town Hall, and featuring on radio and television in the Windrush celebrations that were held throughout that summer. 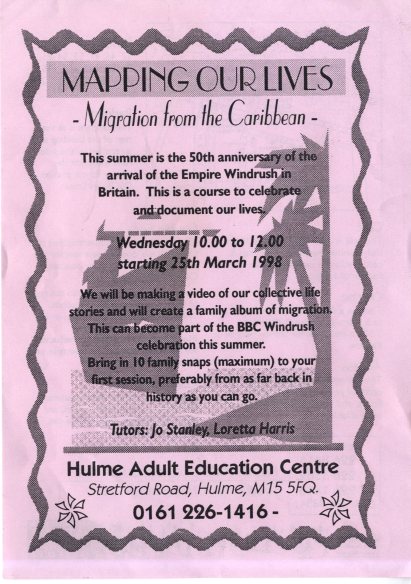 The Centre houses the original primary source material (manuscripts and ephemera) relating to Mapping Our Lives. Leafing through it is to become a fly on the wall, as the participants undergo the process of remembering, writing and developing the ability to learn from and teach others about their experiences. In 2000, the Mapping Our Lives team began visiting schools. This made a profound impact on Barrington. We read in his characteristically neat hand:

I have learnt a lot from my experience with children, it was not only they that was learning from us, but both ways, their enthusiasm for information was really fantastic…

The brief autobiographical notes prepared for Mapping Our Lives were developed into the longer stream of memories Barrington recorded in 2000, for the Roots Family History Project we discovered last time. He also contributed eloquently to the Ahmed Iqbal Ullah Educational Trust’s own Community History Project: Exploring Our Roots.

This project, carried out between 2002 and 2006, involved training school children as interviewers and film-makers, to ask questions of the elders from their own South Asian, Chinese, West African and African Caribbean communities. A mammoth task, it generated DVDs as well as audio and transcripts. It spawned a schools educational pack with accompanying DVD Exploring Our Roots: Stories of Immigration to Britain, and a beautifully-designed coffee table book entitled Roots and Journeys. This included fifteen autobiographies, each with page margins of a different colour. Sure enough, Barrington’s in there, his contribution resplendently bordered in red.

So, what did Barrington have to say?

Interviewed in April 2005 he spoke of school and education, stressing the importance of discipline in forming individuals and preparing them to deal with life’s ups and downs. Remembering his father’s strictness, Barrington also recalled his friendship, as he spent time with his children playing and encouraging them to learn.

Learning and respect for knowledge. These were fundamental to Barrington’s world. Continually reminding disenchanted Black boys in particular that education is never a waste of time, he was still visiting schools introducing Black children to their history. The lack of awareness of some grieved him. How could they have a future if they didn’t understand their past? Without knowing where they’d come from, how could they know where they wanted to go?

But some of Barrington’s strongest words were reserved for mainstream institutions. Approached by a curator from the Imperial War Museum, Barrington didn’t mince his words:

Why indeed. It’s a question Elouise Edwards was asking forty years before, and it’s a question some are still asking today. So there we are. That’s Barrington. And the good news is that he’s still going strong. If you’re lucky enough, you might bump into him in the Centre. If you do, remember to shake his hand.

Mapping Our Lives: The Windrush Project was compiled in the late 1990s. The collection consists of correspondence, lesson plans, rough copies of exhibition pictures and text, as well as other materials. Community History Project: Exploring Our Roots  was undertaken under the auspices of the Ahmed Iqbal Ullah Educational Trust between 2002 and 2006. The collection comprises DVDs, CDs, transcripts and other documentation. As well as the oral history interviews, further deliverables stemmed from this project. Exploring Our Roots: Stories of Immigration to Britain was published in 2006, being an educational pack intended for use in schools, and Roots and Journeys was published in 2008, being a beautiful presentational volume including autobiographical sketches and photographs relating to fifteen of the participants in the greater project.

2 replies on “Finding Barrington. Part 3: The educator gets educated”

Thanks Anne-Marie – glad you’ve enjoyed the posts. That man is a treasure trove of stories and knowledge.