Our cataloguer and book reviewer Jo takes a look at our large and ever-popular History section.

In our new position on the Lower Ground Floor, next to City Library, in the newly refurbished Central Library, we have retained the same subject sections for our books but the layout of our collection is much more light, airy and spacious. Following on from Education, I’ve been taking a fresh look at the History section. 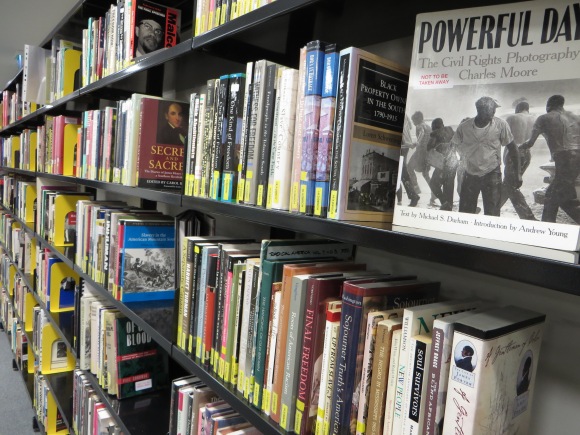 It’s one of the most extensive in terms of the number of publications. All kinds of stories and accounts are told here, from the autobiographical and biographical, the testimonies of individuals and groups of people, to surveys of countries and continents through the lenses of geography, globalism, ethnography, cultural development and power struggles.

There is an emphasis on the Atlantic Slave Trade and the African American experience, as the founder of the collection, Professor Lou Kushnick, taught in the field of American Studies for many years and the original basis of the library collection was his personal collection, therefore centring on African American material and in particular the Civil Rights struggle.

In the History: UK section you can find out about the British Empire (Captives: Britain, Empire and The World 1600-1850, Linda Colley; Absent-minded Imperialists: Empire, Society, and Culture in Britain, Bernard Porter). Books such as these bring home the reality of how Britain developed the habits of occupying, annexing, colonising and enslaving other lands and their peoples. Biographies such as those of Olaudah Equiano and Mary Seacole celebrate the lives of Black heroes and their outstanding contributions – Equiano to the cause of abolition and Seacole to the profession of nursing as she travelled independently to care for British soldiers during the Crimean War having been refused assistance from the War Office, and set up a ‘British hotel’ behind British lines – in effect a field hospital.

Titles call out from the History: US section – From Slavery to Freedom; Urban Emancipation; Ethnicity, Race, and American Foreign Policy; Freedom is a Constant Struggle; Black Activism; and The Civil Rights Era. For anyone studying these subjects, or indeed anyone with an interest in Black and minority ethnic struggles, there are books on all levels of detail, from the broad sweep of historic monographs to the specificity of marginalised group politics, for example Cherokee Women in Crisis, or American Indian Activism.

And the scope of the section does not rest at political history. There are adventures to be discovered, fascinating journeys undertaken and pioneering voyages – just take a look at the books about Black and mixed race sailors (Black sailors: Afro-American Merchant Seamen and Whalemen Prior to the Civil War, Martha S Putney; Black Jacks: African American Seamen in the Age of Sail, W. Jeffrey Bolster). A fleet of Chinese treasure ships arrived on the East African coast 75 years before Columbus crossed the Atlantic – the beginning of a shifting alliance that has been revisited in recent decades between so-called Third World countries and China. The fleet was called the Star Raft, the title of a brilliant book by Philip Snow about China’s encounter with Africa.

There are numerous books on South Africa in the History: Africa section, including Women Under Apartheid, but there is also material on other African countries (Histories of Namibia: Living Through the Liberation Struggle, Colin Leys) and migration stories (Encyclopedia of the African Diaspora). Other sections here include publications about Asia & The Middle East / Australia, South America / Caribbean (India in the Caribbean, David Dabydeen; From Columbus to Castro: The History of the Caribbean 1492-1969, Eric Williams), and books on globalism.

Voices from the past that, without such resources as the Ahmed Iqbal Ullah Race Relations Resource Centre, would simply vanish with the passing of time are kept safe here. The Centre is committed to helping create a racially just society and to promoting social and community cohesion; since the start the Centre has been involved in collecting both historic documents and oral histories from Manchester’s Black and ethnic minority communities. The oral history holdings – typed transcriptions of people’s personal accounts of their own lives and the spirit of their times – complement the History section, bringing new layers and new life to the collection.